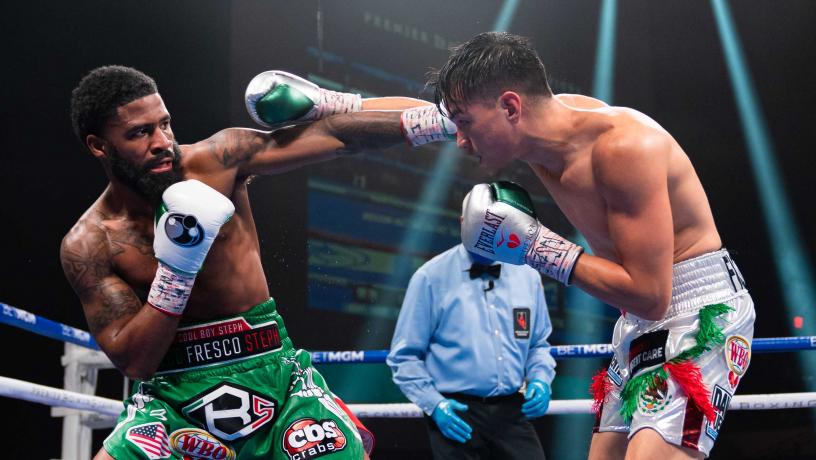 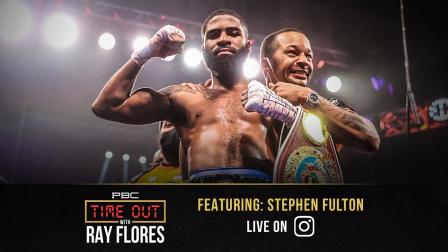 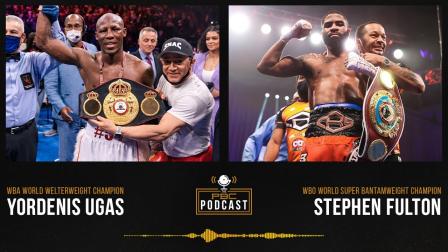 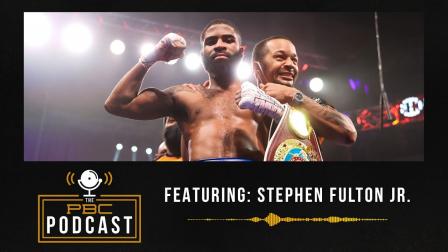 It's Strap Season For Stephen Fulton Jr. click here to get video transcript

Five Fighters On The Rise For 2022

A look at five fighters on the rise who could catapult to the top of the sport in 2022.

Fulton ascends to the 122-pound throne, unifying the WBC and WBO titles in an epic Fight of the Year candidate Saturday night on PBC on SHOWTIME.

The undefeated WBO 122-pound champion says his hands are finally healthy and he's hitting harder than ever as he prepares to face unbeaten WBC counterpart Brandon Figueroa in a world title unification Saturday night on PBC on SHOWTIME.

Undefeated WBO World 122-pound Champion Stephen Fulton Jr. is one of the game's best young fighters--and also one of its best pure boxers. "Cool Boy Steph" is the latest Philadelphia product to make waves in the sport as he continues his climb toward a high slot in the pound for pound rankings.

Stephen Fulton Jr. was born in the Richard Allen projects of North Philly with an arrowhead-shaped birth defect/birthmark on the lower portion of his back. Not fully developed, the muscles on Fulton’s back left a cavernous wound that was never diagnosed but eventually healed.

Fulton has three sisters, with an elder sibling, Ilyana Moore, who dressed the wound along with changing his diapers when he was an infant. A self-conscious Fulton rarely removed his shirt until he began to box at the age of 12.

“When I was a kid, I used to be frustrated that I had the mark, but as I got older, I had fun with it,” said Fulton, whose mother, Commaleana, raised her children in a two-bedroom apartment.

“[His mother] is a strong woman to overcome what she did. I love Mom. She did her best to take care of us. She was a single mother raising four children by herself in North Philadelphia. She had a rough life coming up.”

While Stephen Sr. missed the first 10 years of his son’s life due to a jail sentence, Fulton Jr. endured crime and violence that cost many friends their lives. Stephen Sr. introduced Jr. to boxing, likely saving his life.

“Being at school where you have to walk through metal detectors, growing up with childhood friends getting killed and around people selling drugs...I chose a different route,” said Fulton, whose father named him, “Scooter.”

“My Dad, Stephen Fulton Sr., came home, got me into boxing and I began to focus all of my experiences growing up -- like losing friends to the streets -- into the anger, rage and hostility in the ring. That’s given me all that I need to be successful, and I’m truly grateful for my father, getting me into boxing.”

Being fatherless has helped Fulton to appreciate the time he spends with his 3-year-old son, Abdul Muqtadir, which means, “The Powerful One.”

“Every time [Muqtadir] sees me, he throws a punch,” said Fulton. “He has a variety of combinations, just like his Dad, throwing them at my legs, my arms and everywhere.”

That led to Fulton’s becoming the primary training partner at the VIP Boxing Gym in Manchester, England, for two-division champion Carl Frampton of Northern Ireland in March 2018, with whom he sparred 50 rounds in advance of Rigondeaux’s unanimous decision over Nonito Donaire for the WBO’s 126-pound interim crown in April 2018.

“The sparring with Stephen Fulton was very beneficial. I think he was very similar to Donaire, but fresher, younger and a little bit stronger than Donaire,” said Frampton.

“Stephen’s a fighter with enormous talent. The difference between Stephen and other sparring partners we’ve had over here is that he wanted to learn and improve. I’m very impressed with his potential to be a future champion.”

Fulton’s next fight after training with Frampton was in June 2018, when he improved to 13-0 with a ninth-round TKO of Jesus Ahumada, who was stopped for the first time and fell to 14-1 (9 KOs).

In consecutive bouts in September 2018 and January 2019, Fulton scored a final-round knockdown during a shutout eight-round unanimous decision over German Meraz followed by a fifth-round TKO of Marlon Olea.

“I learned a lot from Carl Frampton, but he learned from me as well. I’m still learning, but, make no mistake: The more that I’m learning, the more dangerous I’ll be,” said Fulton.

“I know I’m the best fighter in the division. If anyone doesn’t believe me, I’m here to prove everybody wrong.”

On May 11, 2019, Stephen Fulton Jr. used his superior speed, height and a piston left jab to win every round (122-107 three times) and dethrone two-time title-winner Paulus Ambunda as IBO world super bantamweight champion by unanimous decision at the Eagle Bank Arena in Fairfax, Virginia.

Fulton scored an eighth-round knockdown and remained undefeated against a 38-year-old Namibian who slipped to 27-3 with 11 knockouts, doing so as the co-feature to an upset unanimous decision by fellow Philadelphian, Julian “J-Rock” Williams that dethroned previously unbeaten IBF/WBA 154-pound champion Jarrett Hurd.

Perhaps even more impressive was “Scooter’s” next triumph on August 24, 2019 at the Bert Ogden Arena in Edinburg, Texas, where his paralyzing left hook to the liver ended a competitive bout, leaving 21-year-old Mexican Isaac Avelar on all fours for a definitive sixth-round knockout.

“It was a great fight, but in the end, I demonstrated that I can win with boxing skills, power and pressure. [Avelar] thought he could beat me, but I proved him wrong,” said Fulton of Avelar, who was 16-1 (10 KOs) in defeat, representing the sixth unbeaten fighter “Coolboy Steph” has faced.

“You have [118-pound titleholders] Luis Nery and Naoya Inoue moving up, and I want both of them. You’ve got guys like [IBF/WBA counterpart] Daniel Roman and [WBC titlist] Rey Vargas, and you had [interim titlist] Brandon Figueroa calling me out earlier in my career. Those are great opportunities for me.”

On January 25, 2020, Fulton took another step up in class as he faced the undefeated Arnold Khegai at Barclays Center in Brooklyn, New York.

Khegai became the seventh undefeated fighter that Fulton was beaten.

“I felt great against a tough opponent,” Fulton said. “I stayed on my boxing, kept him off his game and pulled a victory out. I knew he was a rough and tumble customer, so I just had to keep my composure.

“It feels good to get this win. We've been through tough times and fought tough opponents. I'm proud of my team for staying together. We're Philly strong.”

An Epic Performance For the World Championship

It was everything all hoped it would be.

An accidental clash of heads in the opening round opened a cut over the left eye of Leo but it ultimately did not play much of a role in the fight. The two fighters combined to throw 1,993 punches throughout the back-and-forth 12-round fight which was fought largely at close range in the middle of the ring. Fulton threw 913 power punches which ranks third all time in the 122-pound division’s rich history.

On November 27, 2021, Fulton took on WBC 122-pound world champion Brandon Figueroa in a battle of unbeaten champions at Park MGM in Las Vegas, live on PBC on SHOWTIME. Again, Fulton showed every skill along with the will and heart that made him the eighth unified champion in the 45-year history of the super bantamweight division as he won a 12-round majority decision.

Early on, Fulton established his jab, and plowed Figueroa with a lead right hand. Figueroa tried crowd him in the first round. Fulton kept throwing the right—and kept connecting. Each time Figueroa got near him, Fulton would grab him. In the last :40 of the second round, both fighters never gave each other time to breathe. They smothered each other, but Figueroa used his distance to score.

With 1:49 left in the third, Fulton landed a right uppercut and a left hook that caught Figueroa’s attention. Fulton exerted a little strength pushing Figueroa back, and following with a left hook.

Figueroa came on in the latter stages of the third, with a left hook, but Fulton blocked many of the Figueroa’s shots.

By the fourth, Fulton had his timing down—and Figueroa’s. As the taller fighter approached, Fulton countered him and making him pay with each step.

In the sixth, it looked like Fulton would win the round, but it was Figueroa who swayed the tide of the round. Fulton’s left hooks and right uppercuts appeared to be taking a toll in the sixth, though somehow Figueroa found another gear to press Fulton to possibly win the sixth.

With 2:24 left in the eighth, Fulton slipped against the ropes. Fulton used distance in the eighth, combining once again left hooks and right uppercuts. Fulton was incredibly precise inside. Figueroa used a jab and an uppercut to close the eighth, stirring a huge reaction by the audience.

With 1:30 left in the ninth, the two were forehead-to-forehead, each digging shots to the body. Fulton scored with a right uppercut, and in the last :30, he chopped away at Figueroa’s midsection.

Still, Figueroa kept coming forward—unwilling to allow his will to break.

In the 10th, Figueroa had Fulton in some real trouble, starting with the left hook from an awkward stance to Fulton’s chin. He had Fulton backed into a corner, and Fulton was taking more punishment than he ever had before.

Fulton began using his legs in the 11th. He started to snap a better jab, and a double jab. Just when Fulton seemed to get the round, Figueroa came clawing back. He promised before the fight that he would make it ugly, and he did.

They ended the 11th in each other’s face.

By the final round, it was still questionable who was winning.

Figueroa never gave Fulton a chance to get away. It was Fulton doing the most effective work early on, though it didn’t matter, Figueroa kept coming. Fulton would catch him coming in, and Figueroa could grab and dig to the body. Fulton closed by catching Figueroa with a right, but was it wasn’t enough to deter him.

“He was throwing wild shots that the fans were enjoying, but he was hitting my arms a lot,” Fulton said. “It was an amazing experience. The judges made their decision and we can run it back.”