Rivera implies that he is levels above Frank Martin ahead of their showdown Saturday, December 17 on PBC on SHOWTIME. Plus, more on the return of Gervonta "Tank" Davis.

Plus, hosts Kenneth Bouhairie and Michael Rosenthal discuss the return of Gervonta "Tank" Davis and, in this week's Toe to Toe segment, list the five greatest performances of Davis' career.

For a closer look at Michel Rivera, check out his fighter page.

The PBC Podcast is a weekly boxing show featuring timely analysis and interviews with the sport’s biggest figures. The show is published every Wednesday on YouTube, iTunes, Spotify, Soundcloud, Stitcher, Spreaker and other outlets. Alternatively, listeners can find The PBC Podcast on the PBC website at www.premierboxingchampions.com/podcast.

One of the hottest prospects in the game, undefeated light heavyweight prospect Atif Oberlton is mixing new school flair with old-school, Philly-style toughness.

Boxing superstar and five-time world champion Gervonta “Tank” Davis sent a sold out crowd in the nation’s capital home happy with another memorable victory as he displayed his skills and then stopped featherweight champion Hector Luis Garcia in the ninth round.

The Baltimore-native Davis delighted the 19,731 fans in attendance as he methodically broke down the previously unbeaten Garcia, before hurting him badly with his vaunted left hand late in the eighth round.

Visibly shaken on his way back to the corner, Garcia stayed on his stool as the bell for round nine rang. Moments later, his trainer Bob Santos advised referee Albert Earl Brown to stop the fight, with the official stoppage coming 13 seconds into round nine.

“When I got the shot to my head in the final round, that’s when I couldn’t see from my eye,” said Garcia, who owns the WBA Super Featherweight World Title. “I didn’t know where I was when he hit me with that shot. My vision is back but my head still hurts. I couldn’t see from my right eye. It was going well up until that point. I was picking my shots.”

The two champions jockeyed for position over the first three rounds before Davis got the fans back on their feet with a series of hard power shots late in round four. Garcia displayed a solid straight left hand that he employed to counter the speed of Davis’ jabs, and was the busier fighter according to CompuBox, throwing 345 punches to Davis’ 239.

However, it was Davis’ effective and efficient attack, which built as the fight went on, that helped him take control of the fight. After landing only four power punches in the first three rounds, Davis connected on 69 in rounds four through eight.

“I wasn’t throwing a lot of shots in the beginning because I was trying to beat him mentally,” said Davis. “I was trying to trick him with my hands and my eyes and things like that because he’s a tough fighter. I had to bait him.”

The victory was Davis’ fifth successful defense of his WBA Lightweight Title, and one that the judges saw him in control of throughout, as he led 79-73 on two cards and 78-74 on the third. After the fight, Davis sent a message to his fellow unbeaten rival Ryan Garcia, as the two near a previously announced blockbuster clash this spring. 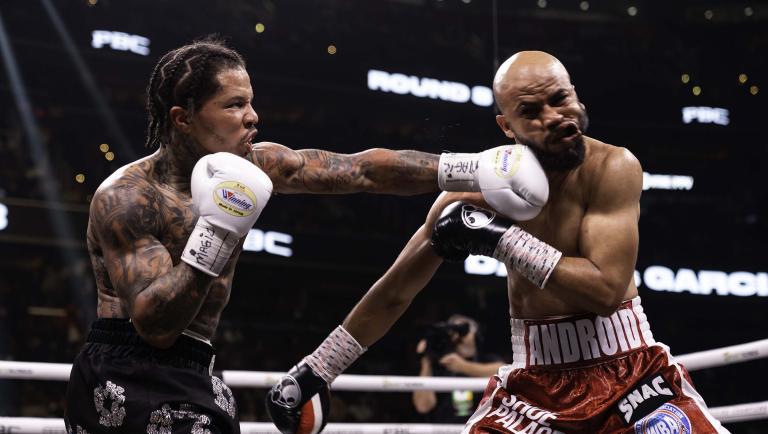 Martin, the unbeaten lightweight, and respected trainer Caicedo are brimming with confidence ahead of the December 17 showdown featuring Martin against Caicedo's fighter, Michel Rivera.

Unbeaten lightweight contender Frank Martin and respected trainer Herman Caicedo are this week's guests on The PBC Podcast. "The Ghost" discusses his highly anticipated showdown versus fellow undefeated 135-pounder Michel Rivera Saturday, December 17 in a Premier Boxing Champions main event on SHOWTIME. Caicedo, who trains Rivera, offers his take on one of the best matchups this year and much more. Plus, on Toe to Toe, hosts Kenneth Bouhairie and Michael Rosenthal list their five favorite boxing venues.

For a closer look at Frank Martin, check out his fighter page.

The PBC Podcast is a weekly boxing show featuring timely analysis and interviews with the sport’s biggest figures. The show is published every Wednesday on YouTube, iTunes, Spotify, Soundcloud, Stitcher, Spreaker and other outlets. Alternatively, listeners can find The PBC Podcast on the PBC website at www.premierboxingchampions.com/podcast.

Representing the boxing-rich DMV area, unbeaten super welterweight prospect Travon Marshall is blessed with speed, power, and athleticism to go along with his elite boxing skills.