Lamont Peterson has overcome being a homeless child on the streets of Washington, D.C., and risen to become a two-division world champion. Read Bio 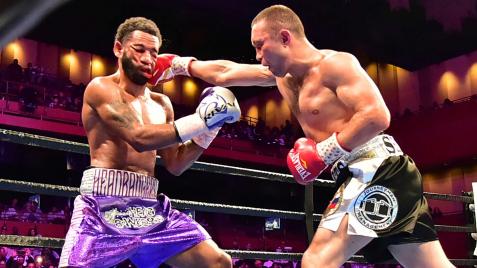 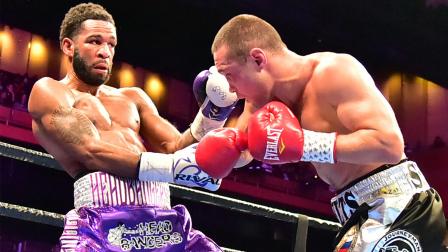 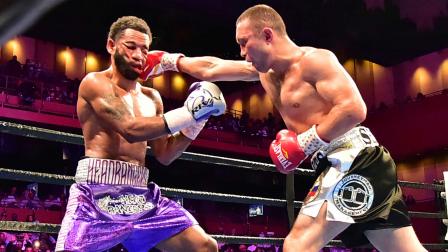 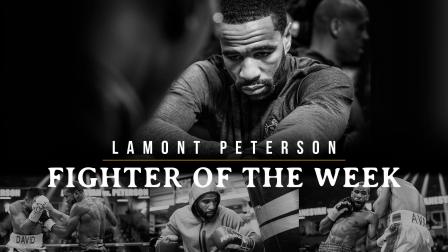 Fighter Of The Week: Lamont Peterson click here to get video transcript

Take a look back at some of the most memorable nights in the extraordinary career of two-division World Champion Lamont Peterson.

Lamont Peterson—a true Washington, D.C. boxing monument—announced his retirement from the sport on Sunday. Below are just a few of the well wishes to the modern day warrior.

The Fight of the Year candidate ends with Lipinets winning via 10th round TKO and Peterson announcing his retirement immediately afterward on PBC on FS1.

Errol Spence Jr. WINS against Lamont Peterson by TKO in Round 7 of 12

Lamont Peterson was just 7 years old when his 11 siblings and mother were forced onto the streets of Washington, D.C. At 10, he met trainer Barry Hunter, who helped turn Peterson and his brother Anthony into world-class fighters. Following an impressive amateur career, Peterson won a world title at 140 pounds, and now the former champion has become a two-division champion by earning a crown at 147 pounds.

Quiet, poised and humble, Peterson doesn’t show any outward signs of the ferocity that can make a fighter’s career.

That’s because he had to master those emotions long ago in order to carve out a career for himself.

Peterson, and his 11 siblings, who include brother and fellow pro boxer Anthony Peterson, grew up in Washington, D.C.

They were forced to the streets when Peterson was just 7 years old after their father went to jail, leaving their mother to raise the 12 children on her own.

Not long after that, Peterson's mother often was unable to care for the family, leaving the kids to fend for themselves.

"You'd play with your friends and you'd have fun all day, and then you knew at the end of the day, once it got to a certain time, your friends were going to go home,” Peterson told CNN in 2012. “They'd be in their beds warm, and you knew that you weren't.”

When Peterson was 10 years old, he met trainer Barry Hunter, who helped turn the youngster’s life around.

Hunter took Lamont and Anthony Peterson under his wing and guided them both to successful amateur careers.

Peterson won the 2000 Junior Olympic title at 132 pounds, then fought his way to a Golden Gloves championship in 2001 at age 17.

It was a promising start for the rising star, who went on to score amateur wins over Rock Allen, Andre Dirrell and Willy Blain.

Once he went pro in 2004 at age 20, Peterson fought throughout the South and Midwest to pile up a perfect 26-0 record.

With Hunter still training him as a professional, Peterson got a shot at the interim 140-pound title in April 2009 against a familiar foe: Blain.

The result was the same in the rematch, with Peterson scoring a seventh-round TKO.

His championship reign would be short-lived, though, as he lost a unanimous decision to Timothy Bradley just eight months later.

Peterson battled his way back to another title shot in December 2011 against two-time champion Amir Khan.

Peterson won a 12-round split decision in Washington, D.C.

Following a 14-month layoff, Peterson returned to the ring, and defended his title with an eighth-round TKO of Kendall Holt in Washington, D.C., in February 2013.

Peterson fought again just three months later, losing for just the second time as a professional when Lucas Matthysse stopped him in the third round of their nontitle bout in Atlantic City, New Jersey.

Peterson bounced back in his next fight, winning a 12-round unanimous decision over previously unbeaten Dierry Jean in January 2014 to retain his title.

He successfully defended his championship again in August 2014, when he gained a 10th-round TKO of Edgar Santana in Brooklyn, New York.

Peterson returned to the ring in Brooklyn, New York, on April 11, 2015, for a 143-pound catch-weight fight against Danny Garcia that was aired live on NBC.

After a slow start, Peterson became more active as the fight progressed and dominated the final five rounds on the referees' scorecards. However, Garcia won a slim 12-round majority decision, gaining a 115-113 edge from two of the judges, while the third scored it 114-114.

“I’m not sure I gave him the first half,” Peterson said in the ring after the fight. “Just because I was moving a lot doesn’t mean I was losing rounds. I came on strong. It was a close fight and the judges gave him a decision.”