In a rough-and-tumble contest, James survived a knockdown, scored one of his own and ultimately used his four-inch height advantage to pull away from Juan Carlos Abreu in a 10-round unanimous-decision victory at Full Sail University in Winter Park, Florida,

Early in the fight, Abreu (18-2-1, 17 KOs) clearly was the aggressor, pushing James against the ropes and landing on several occasions while fighting in close. It wasn’t until the middle rounds when James turned the tables and began getting the better of the hammer-fisted Abreu by fighting from distance in the center of the ring.

James hit the canvas on two occasions in the fourth, first becoming entangled in the bottom rope, then rising and going down from a clear slip as ruled by referee Tellis Assemenios.

But the rangy fighter regained his composure in the sixth, when he used a right hand followed by a left to floor the 28-year-old Abreu.

An earlier right cross hurt Abreu, who appeared to be out on his feet. Even though Abreu was wobbly, James was unable to put the finishing touches on the knockout artist. However, he used his superior boxing skills to close the fight strong and keep his perfect record intact. 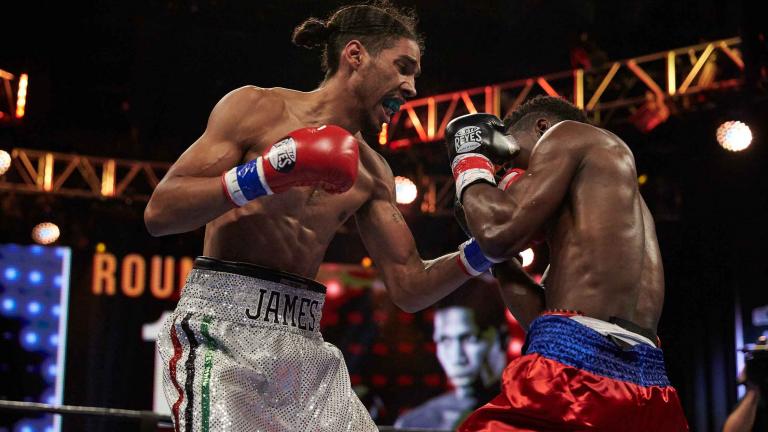 Jamal James gets inside with a left hand during his victory over Juan Carlos Abreu in Winter Park, Florida. (Suzanne Teresa/Premier Boxing Champions)

“Shango” is on the phone explaining what “Shango” means. Hint: Think of a different version of Thor, and with a double-headed ax in place of that big-ass hammer as weapon of choice.

Caleb Truax is looking to rebound after being knocked out for the first time in his career. Fernando Guerrero is hoping to gain some traction after splitting his last four fights.